One of the best bits about living in this particular corner of Europe is the freedom to move daily through border crossings between Switzerland and Germany or France. Armed guards check for smuggling, tax evasion and other crimes but on the whole Switzerland’s involvement in Schengen means there’s a freedom to come and go that our forefathers could not have imagined. But is that all about to change?

Within the last 24 hours Germany has turned towards the EU and exited Schengen by introducing temporary border controls to slow the influx of refugees arriving from Hungary via Austria. They’re expected to be in place for some weeks at least. And now Austria has followed this example closing its border with Hungary. The picture is changing by the hour.

So with these routes closed off…will those desperate to get to Europe look to Switzerland as an alternative way in? In recent weeks the Swiss border guard (SBG) is reported to have acknowledged the presence of an increasing number of migrants along Switzerland’s eastern border with Germany and Austria. Local media have pictured Swiss Police and customs officials on guard at Buchs train station in the eastern canton of St Gallen, the first stop after the Austrian border. Here the refugees did come…but so far Switzerland has not attracted the numbers first anticipated; the State Secretariat for Migration (SEM) is reported as saying that Switzerland is not a preferred destination for Syrian refugees with new figures showing just 401 of them applying for asylum here in August 2015. Some may argue the country is too expensive or unwelcoming but campaigners say the size of the existing Syrian population is small and may be the reason.

So desperate is the situation that there are of course those willing to continue to take dangerous and life-threatening journeys by road and sea putting their lives in the hands of the people smuggling rings. By road, there are two main routes through Switzerland: one leads from northern Italy into Ticino and from there through Basel into Germany; the other leads from Milan in Italy over the Simplon Pass towards France. Switzerland’s newly formed task-force against people smuggling will be under increasing pressure to be ever more vigilant after the German and Austrian border closures.

There are of course many Swiss who want to help by welcoming refugees into their homes. In March I tweeted efforts by some living in Basel to do just that. But the organisers of the Refugees Welcome Campaign say the scheme is yet to be officially adopted in Switzerland.

Basel residents show their support for a campaign to welcome refugees to #switzerland #basel #refugeeswelcome pic.twitter.com/9LWi1RO5K9 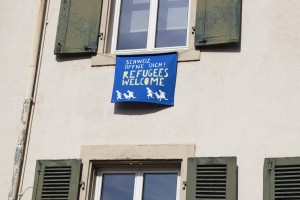 European ministers meet today to discuss the migrant crisis. The graphic and heartbreaking TV images of all those desperately seeking a better life do not look like they’ll disappear from our screens any time soon.