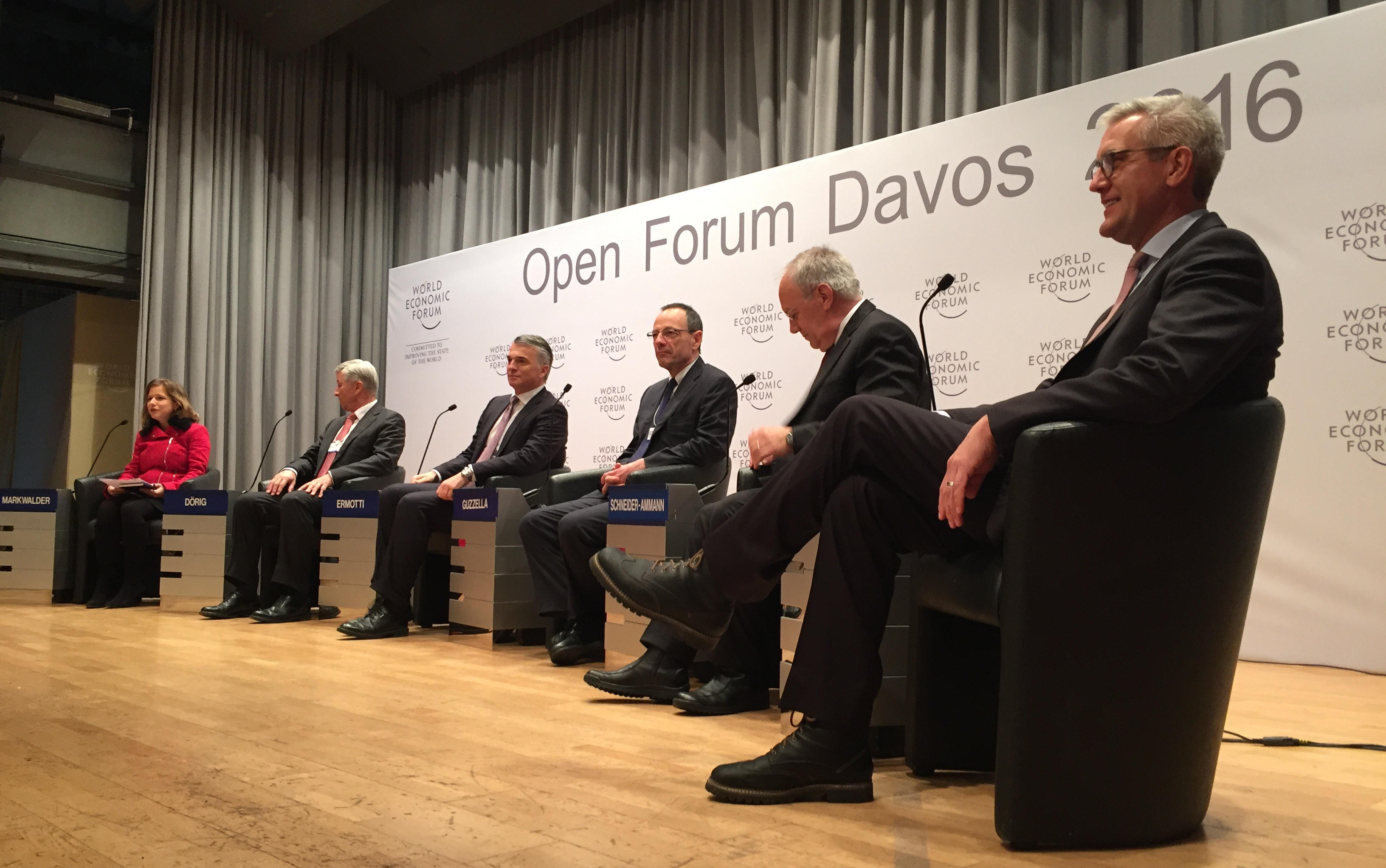 Bombarded with headlines such as Does neuroscience have a future in the courtroom? and What can we learn from rebuilding Fukushima? it was not hard to resist the pull to be part of this year’s World Economic Forum meeting in Davos.

The Swiss ski resort has become instantly recognizable for hosting the annual meeting of great global minds from industry, government and academia, all brimming over with new ideas and solutions to help make the world a better place. And with the world changing at an incredible pace, there has never been a more pressing time to discuss the likes of Europe and Migration or the Chinese economy or feminism or the impact of a technological revolution.

For me, my first Davos more than lived up to my expectations. Along the narrow snow-compacted pavements, boot-clad skiers jostled for position beside the groomed businessmen and woman hurriedly slipping and sliding to what was next on their agenda. There is definitely something surreal about having so many people from so many different walks of life descend on this Swiss community as it continues about its everyday life, shopping at the Coop or queueing at the post office.

Italian, Russian, Swiss and American accents wafted past me, everyone avoiding stepping out onto the road where executive cars and shuttle buses ferried delegates to and from their next meeting. There was as expected a large security presence and of course the world’s media greedily vying for the best vantage point for their cameras and reporters.

I was there to attend an Open Forum event entitled ‘Is the Swiss Model under threat?‘. The room quickly filled with an older Swiss audience eager to hear the debate around issues that could potentially jeopardize the framework of this wealthy and successful country.

The panel, which included industry CEOs and the president of the Swiss Confederation were united in their opinion that the Swiss had not gotten where they were today without being hard working and prudent. “Our world is not God-given” said Lino Guzzella, President and Professor of ETH University in Zurich, through an interpreter. “We have not taken our wealth from the ground like oil…we are intelligent people who have worked hard and been entrepreneurial”. There were some reassuring nods from the audience.

But Switzerland must now implement a series of controversial people’s initiatives concerning issues such as second homes, a green economy and a minimum income. Will the work of direct democracy prove to be their undoing? Not so said Sergio Ermotti the CEO of the UBS Group. We are a voting people who value being able to express concerns. This is what has helped make us strong.

And how will the implementation of the 2014 referendum on migration restrictions harm industry and EU relations? And more widely how will Switzerland with its humanitarian tradition respond to the continuing tragedy of the refugee crisis? It is not our intention to remain an island said the President Johann Schneider-Ammann. As far as welcoming Syrian refugees, Switzerland he explained cannot shun this challenge. The Swiss government had already pledged 50 million francs to aid agencies in Syria. Investing one Swiss franc there creates a bigger effect than that same one franc would have here, he explained. Under the Swiss Convention he promised those whose lives are at risk would be helped, but that economic migrants would be returned as soon as possible.

There was much talk too that Switzerland should be proud of its two-tier education system and continue to build upon this and maintain its talent pool if it is to meet the needs of knowledge-intensive industries. Compared to the European average, Switzerland has a low unemployment rate of around 5 percent, which equates to around 10,000 unfilled jobs. More training for specific skills was needed to fill these jobs it was explained and it was not enough to say global migration flows would be an instant solution to the problem.

Switzerland has long encouraged its people to be prosperous, but materialism alone may not solve the difficulties this country now faces. There remains uncertainty over its relationship with the EU, and it continues to face increasing competition from Asia and America as well as the fallout of years of a strong Swiss franc. But in true Swiss style, there was no defeatist talk, just a stark reminder that the country must roll up its sleeves and keep on working as its forefathers did. It is this very work ethic after all, which has earned Switzerland its reputation for being synonymous with quality and accuracy.

As I sat on the train departing Davos on time that afternoon, I thought how stark the contrast between life in this Swiss town and the much more difficult living conditions that so many people are existing in around the world right now. These leaders must surely see this contrast too and know they have the power to bring about change in the very lives of the people they are serving.