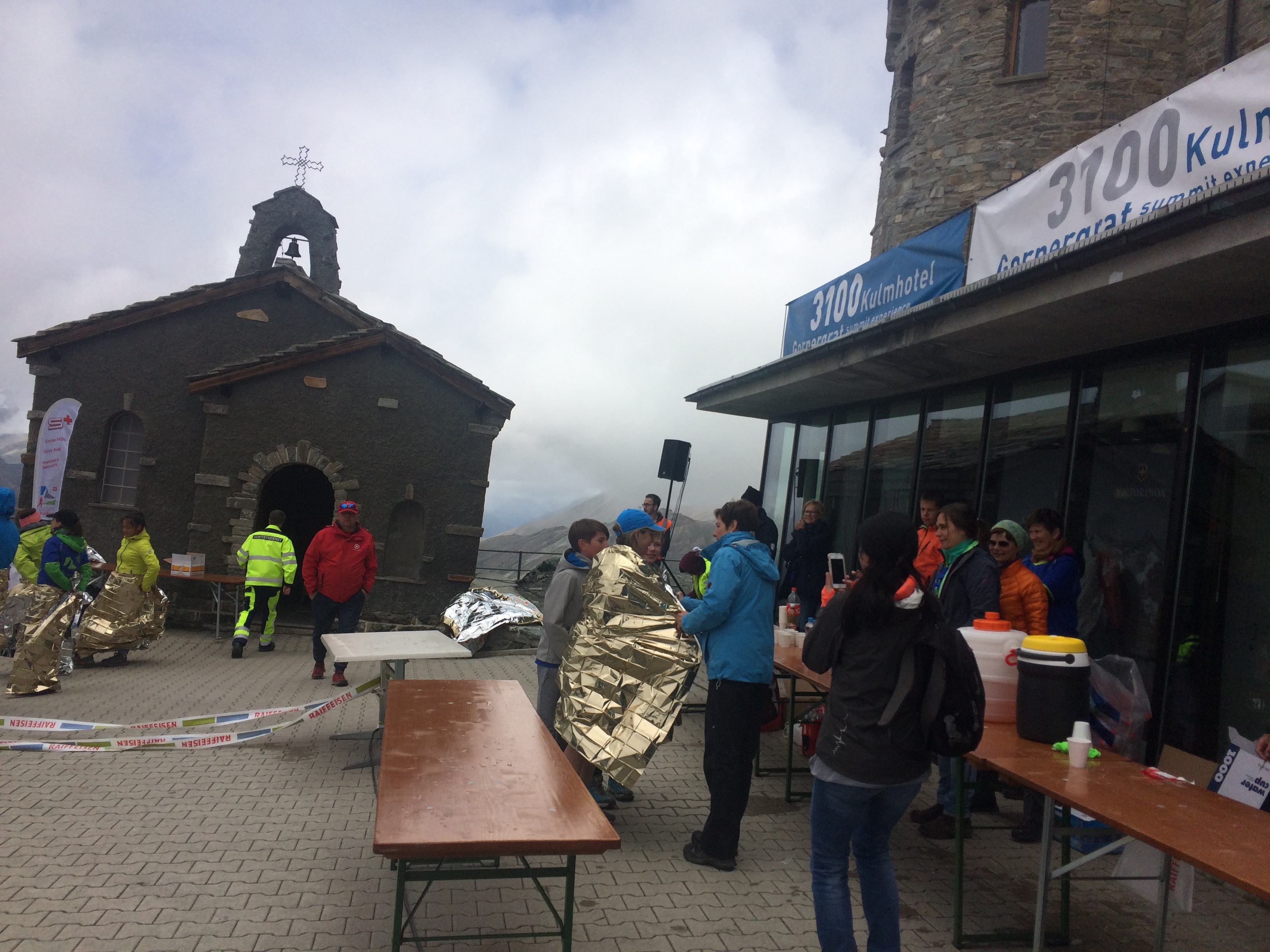 I often say I’m not really a runner but just last week I ran my first ultra mountain marathon. I’ve discovered a joy and freedom that longer distance brings and naturally I wanted to know what an ultra felt like. Now I know! In this case 45.5 kilometres of trails ascending almost 2000 metres upwards along the hot steep tracks of the Mattertal.

I was one of thousands of runners gathered on a warm Saturday morning to compete in the 16th Zermatt Marathon. Running off along the path that morning I felt sick with apprehension and I was clearly suffering from a severe case of silliness. But I would end the day crossing the highest-altitude marathon finish in Europe – at the top of the Gornergrat (3100m Kulm). I was certain of it and that was keeping me going. “Bon Course” said a stranger next to me. “Merci” I giggled back at her.

Leaving St Niklaus behind us I knew I would have to keep up a reasonable pace for the first half of the race to Zermatt. I’d already run the Zermatt half and marathon in the previous two years so I knew the course well which really helped. With an easy to moderate pace I could save strength for the steep uphill sections I’d hike later, and with a bit of luck still make the cut-off times at Riffelalp (2211 m) and Riffelberg (2582 m).

Running through some of the most beautiful mountain scenery free from the routines of daily life, I was the happiest woodland nymph in Switzerland. But just beneath the surface I also felt the pressure of knowing I’d face disqualification if I didn’t make the cut-off times.

I say I’m not really a runner as I’m relatively new to it, having joined a running club when we first moved to Switzerland several years ago. With young family and work and other commitments, like so many people it isn’t easy to find the time to commit to a regular sport, and I found running with a club was sociable, didn’t require huge commitment and allowed me to run-off the stresses of the day.

It wasn’t long before I started running small race events; a snowy 5k Basel Stadlauf beneath the glow of the city’s Christmas lights, then a muddy woodland 8 K Birslauf Race followed by the cultural three countries experience of the Dreiländerlauf half marathon and then sometime later the London marathon.

Of course for all these events and others – and for the Ultra I did train – but that training was somewhat sporadic to say the least. Life was busy and so much seemed to get in the way of those much aspired-to longer runs. I did have a good understanding of what was going to be required of me though, and so when the running failed me, walking, biking and swimming was built into my daily routine convincing me I’d be fine on the day. I was race ready. I was sure of it.

But of course whether I really was physically race ready I couldn’t say, but importantly I had a plan in my head and I had the mental stamina to accompany it. That day had more than a hint of adventure about it, and I ended the race truly exhausted but brimming with happiness and some great memories. That of hearing the haunting sound of alphorns as I rounded a steep corner – or the group of Japanese tourists venturing towards me on a narrow path, their faces adorned with surgical masks and shaded by wide-brimmed hats, who formed a line to high-five me as I passed – my hand meeting their gloved ones. They’ll never know how much that small gesture greatly raised my flagging spirits.

Having made it to the cut-off times required to complete the marathon distance I just had to get the all-clear from the controllers deciding if you’re able to continue upwards to complete the ultra distance. One of them suggested I shouldn’t go on because in his mind I didn’t have enough time to climb the 3K distance over the 500 meters elevation. I felt hesitant but luckily another official stepped forward and with a cup of hot salty bouillon and a sugary gel in hand announced ”let her have a go – she might just do it”. Just over an hour later I stumbled across the finish line. I did have a go and I did do it. 7 hours and 53 minutes. Another 7 minutes and I faced disqualification. I was never so happy to see the family and friends who’d volunteered their support by being there at the top that darkening snowy afternoon.

So if you happen to be reading this and you’re wondering if that longer distance or specific race event you’ve eyed seems too elusive – then think again. With the correct training Buy Scabo Stromectol , an active lifestyle and importantly a vision to achieve it – I believe competing in and finishing these bigger events is possible. Without realising it I appear to have started out on a running journey all those years ago. Your journey might not seem as daunting as you think.

Now, it may just be about time I stopped saying I’m not really a runner…

1 thought on “Zermatt Ultra: Alphorns, cowbells and sugary gels served with a hint of adventure”